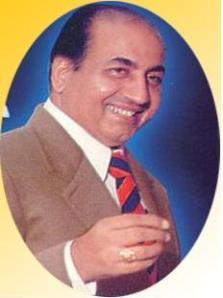 He died 4 months after I was born. But he left his legacy behind to cherish for the rest of my life.

That’s the kind of impact Mohammad Rafi had on his listeners. His mellifluous voice was God’s gift to mankind and an irreplaceable boon to the fraternity of playback singing. I am fortunate that I grew up listening to his songs, that are considered to be immortal.

Rafi Saab ruled the hearts of people of more than 4 decades and 50’s to 70’s were considered to be his golden era. Late 70’s and 80’s saw the emergence of another genius, in the form of the inimitable Kishore da, but that did not deter Rafi from becoming one of the finest playback singers in the history of Indian Cinema.

Be it fun or frolic, melody or classical, disco or pacy numbers, Rafi Saab was equally adept in handling all kinds of tracks with elan. To say that he influenced a plethora of actors and their status as superstars would be an understatement. He has inspired eras with his versatility and catapulted some ordinary actors in to super stardom by rendering his voice to their physical image. And that to me, is a testimony to Rafi Saab’s talent and a big ‘Salaam’ to his voice, which has produced some absolute gems with phenomenal ease and panache.